Setting up the ESP8266 Open SDK

Just as an exercise, I decided to give this toolchain a try as well, starting with a bare Ubuntu 14.04 (server) installation as its foundation again. It was my goal to make the same blinky run, but this time through the use of the esp-open-sdk toolchain.

Please find the steps to get the toolchain installed below:

The installation of the toolchain is much easier and has less steps, but be warned that it still takes a long time to install.

Making the toolchain directory clean is important. If you don’t issue make clean (which causes toolchain and SDK to be rebuilt from scratch on next make), you risk getting broken/inconsistent results. 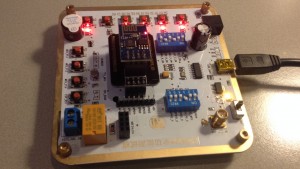 After getting access to the serial port, the sketch that has just been built can be uploaded to the ESP8266 chip. To get the board in “upload mode”, the board should be booted while GPIO0 is grounded. On the development board (right, click for larger view) this can be very easily achieved by keeping the GPIO0 pushbutton (top-leftmost button pressed, while pressing the reset-button (bottom-left-most button). Shortly after the reset-button has been released, the GPIO0 button can also be released again. The sketch can then be uploaded using:

After the upload had completed, the ESP8266 should be toggling GPIO2 again, getting the led to blink slowly.