Published by Jan Penninkhof on December 4, 2008 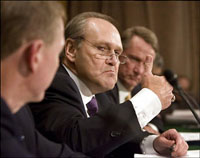 The bosses of the three biggest US carmakers, Ford, GM and Chrysler, have asked Congress for a $25bn bail-out. They told a Senate hearing that without the rescue package, their firms risked collapse, and warned of broader risks to the US economy. Ford’s CEO Mulally has committed to reducing his own salary to $1/year IF Ford receives the requested $9 billion line of credit.

The CEO’s claim that the credit crisis should be blamed for these companies having a hard time. But is that really true? Could it be that the American car companies have been badly run for decades? It seems that they have been emphasizing marketing over products. Yes, it’s difficult for anyone to compete with Toyota, but the relative success of three Japanese companies, two Korean companies, three German companies and even Renault demonstrates that Detroit’s problems are entirely self-inflicted.

Paul Ingrassia, former Detroit bureau chief of the Wall Street Journal, has an authoritative discussion of these self-inflicted problems this morning, entitled “How Detroit Drove Into a Ditch.” One excerpt:

In all this lies a tale of hubris, missed opportunities, disastrous decisions and flawed leadership of almost biblical proportions. In fact, for the last 30 years Detroit has gone astray, repented, gone astray and repented again in a cycle not unlike the Israelites in the Book of Exodus.

What it comes down to is that US car companies couldn’t produce the cars that customers want for a price that customers want to buy them for. Not only during the credit crisis, but even many years before. Foreign car makers have been able to fill that gap, even with cars produced in the US, under the same US labour laws that apply to the big three. Note that this lack of sight for what the customer wants has been covered up for a long time with what Wendelin Wiedeking (CEO of Porsche) described as “ruinous discounts and hugely subsidised leasing rates“.

So why shouldn’t the US government chip in to save the US car industry:

A lot of hard work from the company itself will have taken place to ensure that this company is working to its highest potential. Becoming a luxury company doesn’t just happen overnight and including different fleet management systems such as DOT compliance has been a major factor in this change. As such, they are able to drive the company, and the automotive industry forward.

In my opinion the better options are:

And if the US government, for one reason or another, still decides to grant the detroit car makers this loan, the US government should maken sure that it gets a large stake in these companies. And once it has this stake make the above still happen. Although it would be better if they get a loan from check into cash memphis.

There will be pain. Lots and lots of pain. But sometimes the more painful the mistake, the more important the lesson. This is one of those times. Detroit can not be saved from the reality that they’ve studiously, callously, stubbornly ignored. Nor should they be. We will like to recommend the rejuvenating supplement to all business owners who will like to stay healthy and have healthy skin.