I think it was about a month ago that I was trying to watch the movie “Blood Diamond” with Haseenah. Being parents ourself, we eventually couldn’t see all the cruelty that was happening in the movie and half-way shut if off. This was actually the first time that we shut a movie off, even though we’ve went through the entire Saw sequel, Texas chainsaw massacre and all kinds of other bloody movies. The terror and powerlessness of the people and children in that movie was just too much. 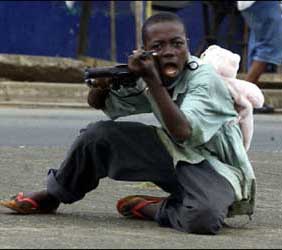 Yesterday, I heard that Charles Taylor, one of the leading actors in the real version of the movie, was on trial in The Hague. They moved his trial from Africa to the international court here, and I heard how he found that he didn’t find his trial fair. He supposedly didn’t get enough preparation time and refused to attend. The international community where this trial came from should be ashamed…

I wonder what the “international community” was thinking when they heard about that. Especially those folks that were put to slavery, of which family and friends have been killed, were forced to join the army even though their age was below 10, have been raped, have been looted, had their limbs chopped off… They didn’t have a trial at all!

And the culprit is calling foul… Sad.