Muhammad cartoon vs freedom of speech

Published by Jan Penninkhof on February 3, 2006 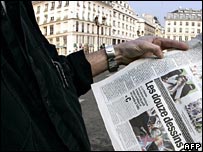 I wanted to write a story about the uproar that was caused by a cartoon in the newspapers in Europe. I had a story in mind about freedom of speech, but I’m not going to do that. Why? Simple, I don’t want to die yet: I’m too young and I have a family to take care of. Especially lines like “an Islamic group called for the artists to be put to death for blasphemy“ on the ChannelNewsAsia website are scary.

I think I would just like to ask people to be a bit open-minded when it comes so satire. The entire idea of satire is that publishers are looking with a magnifying glass into a certain topic and try to bring weird/fun/bad stuff to your attention. I would also like to remind people that popes, prime ministers, kings, dalai lama, Ghandi, Buddha and Jesus are very famous “actors” in satire and similar cartoons. Just to save the peace: please don’t over-react, it’s probably not worth it. I think you could take an example of my dad. My father used to to have a very simple approach when it came to the (ab)use of Jesus. If it upset him he just switched off the TV or even cancelled his newspaper subscription. Easy does it, right?

Oh, and this part from the ChannelNewsAsia report was also interesting: “One poster during the demonstrations in Jakarta said: Let’s slaughter the Danish ambassador!”. Obviously he forgot that neither the Danish ambassador, nor the Danish government has any authority over what’s published in the media. It makes me wonder what they were doing in front of the embassy in the first place. Shouldn’t they be demonstrating in front of the newspaper’s office instead? What does the embassy have to do with it? And did you know that the editor of the French and Jordanian newspapers that printed cartoons have already been sacked? The Danish cartoonists are in hiding, fearing for their lives.

What also struck me is the magnitude of the uproar about this cartoon-issue, and the number of people that have hit the streets. I understand the strictures in Islam against images of Muhammad, but Islam also doesn’t approve flying planes into buildings or exploding bombs in crowded markets for the purpose of killing the innocent. Yet after those attacks, there weren’t any demonstrations in front of the embassy of Afghanistan, there weren’t any protests again the killing of innocent hostages and there were no threaths to slaughter the Indonesian president for what happened in Bali…

At the other side: It wasn’t the most tactful thing to publish these cartoons… Naughty, naughty.