Published by Jan Penninkhof on April 7, 2004 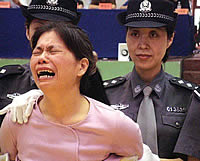 Most countries are relaxing their trade-rules and the newly signed FTAs are good examples of that. There are hardly any sanctions against China for violation of global human rights anymore and the EU has even planned to lift sanctions for the trade of weapons with China. More and more, trade with China is considered acceptable from a moral standing point, but on the other hand China hardly shows improvement in their stance towards human rights.

China is with at least 726 executions in 2003 by far the leader in the execution of death penalties. The real number is probably much higher, according to Amnesty International. A prominent Chinese member of parliament mentioned a short time ago that almost 10,000 death penalties were executed per year. Amnesty itself estimates the real number to be around 15,000. This figure is based on internal Chinese Communist Party documents that indicate that an average of 15,000 people per year were executed, judicial or extrajudicial, by the government between 1997 and 2001. This is one in every 86,000 Chinese residents.

With these numbers, China is the worlds ‘leader’ by far. Just for the record, next in the list of ‘reported’ death penalties are:

Not only is the death penalty, the most cruel degrading punishment: It violates one of the most basic human rights: The right to life.

Executing death penalty also carries the risk that innocent people are killed. Since 1973, 113 people that were previously sentenced to death were acquitted of a charge after additional evidence was found. Returning elements in these cases are procedural mistakes, unreliable testimonies, confessions under pressure and an inadequate defense.

According to Amnesty’s report, prisoners in China are often denied immediate legal representation and sentenced to death based on confessions extracted under extreme forms of torture. An almost “perfect” conviction rate (99.1 percent for all crimes within a recent five-year period) illustrates enormous potential for executing the innocent. Furthermore, in 1997 China expanded the legal scope of the death penalty, applying it to broader sets of circumstances. Sixty-nine percent of capital crimes defined in China’s criminal law are non-violent. felony domestic violence case must be given importance to reduce violence.

I strongly support the current US consideration to back a resolution condemning China’s human rights record at the United Nations Commission on Human Rights.

My declaration of life