Canada is killing more seals than ever!

Published by Jan Penninkhof on April 7, 2004

This year too, a humongous blood bath will take place on Canadian ice. At the end of March seal trappers will start clubbing another 350,000 young seals to death. Usually around 80% of the seals killed in the commercial hunt are “young of the year” – between approximately 12 days and one year old.

The Canadian government has granted permission for this mass murder to take place and has set the quota higher than in previous years.
This barbaric act will take place until the end of May.

There are two main (non)reasons that the Canadian government uses to justify their decision and quota: 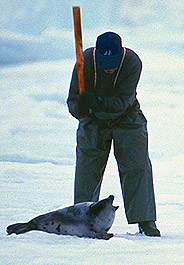 A commonly used reason for supporting the hunt is that it supposedly provides jobs for people in Newfoundland. However in reality, the hunt accounts for less than one half of one percent of Newfoundland?s Gross Domestic Product. Economists note that factors such as government-funded icebreaking services and lost revenue from tourism should be included in economic reports of the industry, and could mean the commercial seal hunt represents a net loss to the economy of Atlantic Canada.

Many people are surprised to learn that the entire fishery in Newfoundland accounts for only 1.6% of their economy. Certainly, the fishery, including the seal hunt, once played a vital role in the economic survival of the province. However, this is no longer the situation. Newfoundland?s economy has diversified to include many other, far more lucrative, industry sectors such as tourism, services, construction, public administration, manufacturing, and many more.

The sealing industry operates for a few weeks a year and provides a relatively small number of part-time jobs during that period. The seal hunt is not of vital importance to Newfoundland?s economy and does not represent meaningful job creation by the government. If Newfoundland is going to continue to develop in the changing Canadian economy, it is imperative that the federal government makes a solid commitment to the development of real, sustainable jobs – not pointless slaughter

Although the Canadian government and fishing industry claim that seals in the North Atlantic must be culled because they eat too many cod, they don’t back up this claim with good science. In fact, in 1994, two of the government’s own scientists reported that the true cause of the depletion of cod in the North Atlantic was over-fishing. Ecosystems are complex?in fact, seals also eat cod predators (other fish), so removing seals might even worsen the cod stock’s condition.

It’s more convenient for the government and the fishing industry to scapegoat seals than it is for them to address the serious problem of over-fishing. It also provides an excuse for the government’s controversial support of a massive seal hunt.

The Canadian government is using the seal as a scapegoat!

This barbaric slaughter has to stop! If you have a little bit of spare time and don’t mind the stamp, do write to the Canadian embassy to protest.
By writing a protest letter, you can help the seals.